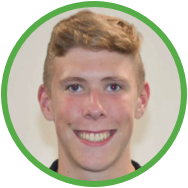 How did you get into rowing?

How does it feel to represent Ireland in rowing?

It’s been a dream of mine ever since I started rowing. Last year I was honoured to row for Ireland in Coupe de la Jeunesse. It’s a great feeling to know I’ II be representing Ireland again this year too.

What are your future goals in rowing?

My goal for the next few years is to continue rowing for Ireland at the U23 world championships and to qualify for the 2024 Olympics.

I mostly just try to rest in between sessions, but sometimes I go rock climbing with the rest of the four which is good fun.