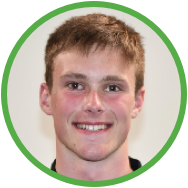 I live in Rochestown and I attend school at St Francis College Rochestown.

How did you get into Rowing?

I did a summer camp in Shandon when I was 13 and I really enjoyed it so I joined up straight after. I was doing other sports at the time and they were slowly abandoned the more I got into to rowing. At the time I had no idea that rowing would become such an important thing in my life 5 years later.

When not rowing, what do you do in your spare time and do you have any hobbies?

When I’m not rowing I’m usually trying to recover from rowing! I’d either be in school or spending time with my friends. I also dabble in rock climbing.

If you weren’t rowing what sport would you be doing?

If I wasn’t rowing I think that I would be doing either swimming, cycling or basketball. I would also like to do triathlon.

How does it feel to represent Ireland in rowing?

I am very proud to represent my country. It’s something really special to wear the Irish jersey. It’s an amazing feeling that is incomparable to anything else that I’ve experienced. There is a lot of pressure that comes with it but it is definitely worth it in the end.

What are your future goals in rowing?

Well, firstly I hope that we will be coming home from Tokyo with a medal. I also plan on rowing through college and it will be exciting to see where that will take me. Another goal in rowing would be to go to the olympics but that would be a long time down the road.